In 1924, when Dan Blanco’s Northern Lights Café was making headlines in Chicago’s newspapers, Evelyn Nesbit struggled to stay solvent and maintain her career as an entertainer.

At her home base, Hotel Martinique in Atlantic City, Nesbit was consumed with the on-going sanity hearings of her ex-husband, Harry K. Thaw. Simultaneously, she was battling with her current husband, Jack Clifford, seeking a divorce that was long overdue.

In between discussions with lawyers, Evelyn Nesbit performed in, of all things, a Yiddish play entitled “The Dance of Death.”

In Miami, Florida, she was scheduled to perform at a roadhouse when the Ku Klux Klan threatened to make her stay in the city very unpleasant. The management canceled her booking.

Never a dull moment in the life of Evelyn Nesbit.

Evelyn Nesbit’s last booking at Club Alabam was in the spring of 1939. Appearing with her was friend and Club Alabam regular, Paulette LaPierre.

Prices remained reasonable. Club Alabam habitués could order a charcoal steak or broiled chicken dinner for $1.50. There was never a cover or minimum charge.

During the 1920s and 1930s, Evelyn Nesbit made Atlantic City her home base.  There, Nesbit lent her name to more than one club or cabaret, performing in many more.

Seen here with one of her Belgian Griffons (identified as a “Japanese Poodle”), she had proudly put on fifteen pounds after a “cure” for her narcotic habit.

Want to learn more about Evelyn Nesbit’s struggle with addiction? It’s detailed in my new book, The Blackest Sheep.

John Barrymore in My Dear Children.

In 1939, Evelyn Nesbit made her last known appearance at Chicago’s Club Alabam.  During this engagement, she was reunited with an old flame, John Barrymore.

That spring, Barrymore was appearing at Chicago’s Selwyn Theater in the comedy My Dear Children. Following one rollicking evening on stage, the tired thespian found his way to Gene Harris’ Club Alabam, to find Evelyn Nesbit on stage. The histrionic Barrymore publically declared his love for her, recalling their unrequited, youthful romance, no doubt receiving shocked applause from the Club Alabam regulars. 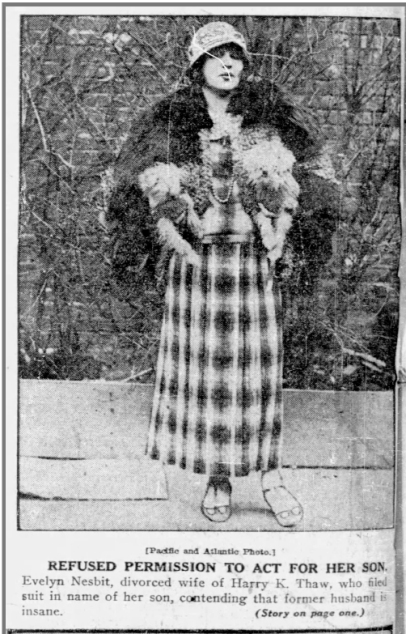 In 1925, Evelyn Nesbit made a spectacular comeback at Chicago’s Moulin Rouge Café. She traveled with her four Belgian Griffons.  Never without a lapdog or two or three, Evelyn’s beloved Griffons even accompanied her to Panama.

“They are so much more companionable than men,” she told the press. “Dogs are honest and faithful and never deceitful. That’s more than you can say for some men.” 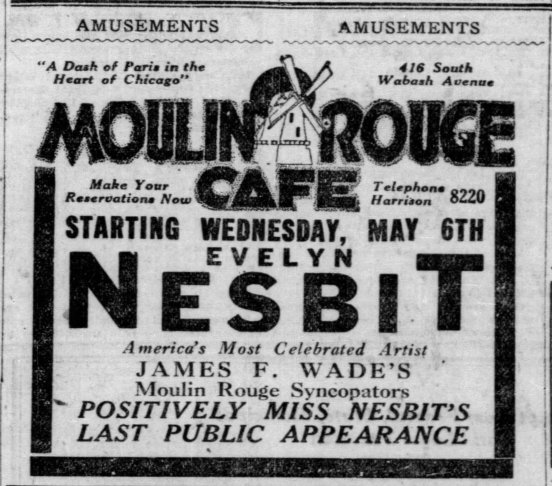 Newspaper advertisements warned that this engagement was “Positively Miss Nesbit’s Last Public Appearance,” which was far from the truth but may have attracted crowds. It was quickly apparent that Bill Rothstein had a sensational hit on his hands.

In her cabaret act, Evelyn wore striking black and white gowns. She no longer danced professionally (as she had in vaudeville). Instead, songs filled her act. The cabaret pace was perfect for a middle-aged mother.

During her appearance at the Moulin Rouge, Dan Blanco and Evelyn Nesbit would cement a long-lasting relationship and, within a few years, she would grace the stage at his new establishment, Rush Street’s Club Alabam. 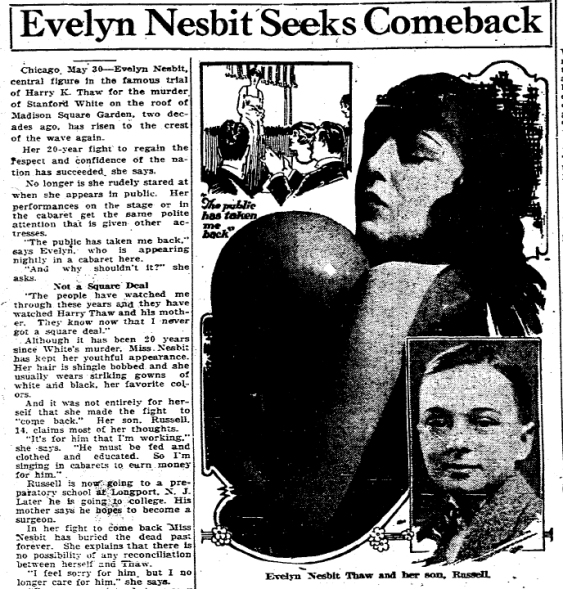 In 1925, after trying review-style shows at his café, Rothstein hired Blanco to create a cabaret-type show, with star bookings. In May, the announcement of Evelyn Nesbit’s forthcoming appearance at the Moulin Rouge became national news.

At forty, Evelyn maintained her youthful beauty.  Her famous Gibson Girl curls had long been bobbed, adding to her pert appearance.  Chicago stood ready to welcome her with open arms.

When I first began research about my great uncle Gene Harris and his legendary Chicago nightspot, Club Alabam, I wasn’t confident that there was an audience for his story. Then I discovered that the scandalous beauty Evelyn Nesbit performed at the club, becoming a friend and colleague of Dan Blanco and later Gene Harris.

If you recognize the name Evelyn Nesbit, you were likely introduced to her in the novel Ragtime, which was later made into a movie and, more recently, a Broadway musical. If you are new to Evelyn’s life story, you are bound to find it captivating.

While the details of her early life and her connection to “the crime of the century” (her husband Harry K. Thaw’s cold-blooded murder of her former lover Stanford White) had been told and retold, Evelyn’s long and fascinating life following the 1907 and 1908 trials was treated as anti-climactic.

During and after Prohibition, Evelyn supported herself and her only son, Russell Thaw, by working in cabarets and nightclubs. Criminals and powerful gangsters populated her world. Addiction to narcotics, initially used for pain relief, plagued her for decades. Her roller coaster of successes and failures, in love and in show business, was a wild ride.

My new book, The Blackest Sheep, recounts the “second half” of Evelyn’s biography, revealing her phenomenal inner strength, native intelligence, and ability to survive notoriety that would have destroyed most women.